According to Twitter, University of Maryland, Baltimore County (UMBC) Athletics started with roughly 5,000 followers at the beginning of March Madness and gained 25K followers from 10:00-11:00PM ET on March 16 during its historic upset against University of Virginia (UVA). Throughout the NCAA Tournament, UMBC Athletics gained over 100K Twitter followers.

An analysis of UMBC Athletics Twitter account, run by 27-year old Zach Speidel, shows the progression from tipoff, until the end of the game. From 148 favorites and 19 retweets at tipoff, Speidel’s sense of humor and the flow of the game started to attract users. At halftime, UMBC Athletics update collected 2.4K favorites and 489 RTs.

Here are some of UMBC Athletics top tweets during their upset against No. 1 seed Virginia State. 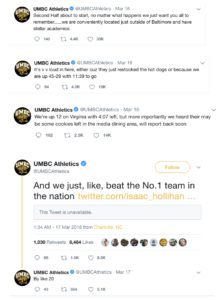 Although the game broke history, and nearly every fans’ brackets, can UMBC continue to break Twitter records? An analysis of UMBC Athletics Twitter page from January 1 to March 22, 2018 shows that their only signs of engagement were during it’s basketball teams appearance in the NCAA Tournament. Before the tournament and before halftime, UMBC had little engagement with fans. Luckily, they had a breakaway during March Madness that led to their current following of 105K. Unfortunately, UMBC lost in the second round of the NCAA tournament to Kansas State on March 18 and will most likely begin to see a sudden decline in user engagement on Twitter. Maybe Speidel will continue his Twitter commentary for spring athletics at UMBC and bring Twitter to life once again with his quick wit responses. 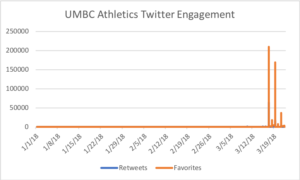