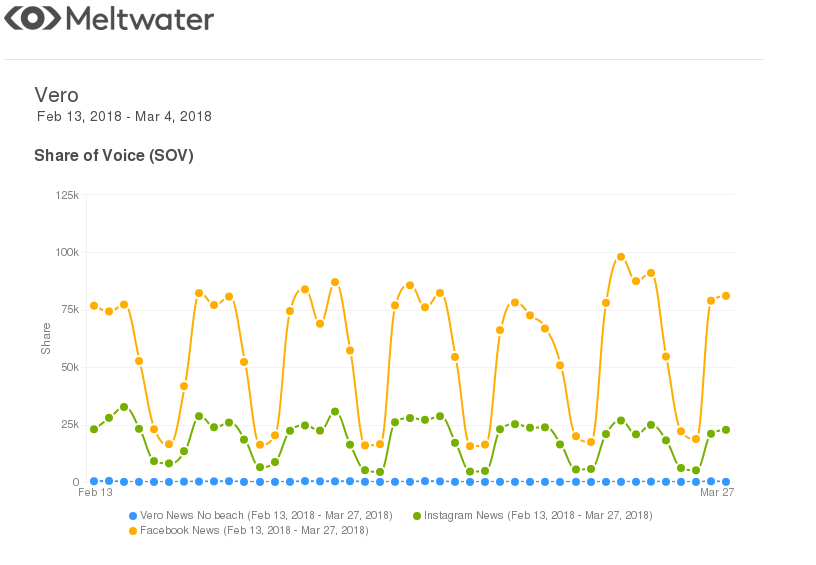 With Facebook’s data scandal capping off an abysmal month for popular social media platforms, many people are looking for alternatives. One such alternative is Vero, a once promising, advertisement-free app that reached peak hype at the end of February. After word got out that its founder, Ayman Hariri, was associated with a company headquartered in Saudi Arabia that didn’t pay its workers, Vero became the subject of backlash and there was even a movement prominent on Twitter to delete the app, aptly called #DeleteVero. Not even two weeks after its emergence, Vero took a springboard dive off the social media radar. However, Hariri’s shady past isn’t the only thing that killed Vero. Here, I’ve outlined several other key points social media creators can take away from Vero’s downfall.

This seems like a no-brainer, but an app’s servers are crucial for its launch or when there is a surge in users. When Vero spiked in popularity in February, the amount of activity slowed its servers and the app crashed for many people, including myself. Seeing that the app has been around since 2015, this was especially frustrating because it hadn’t been adequately prepared for the attention its creators desired. Obviously, this hurt Vero’s reputation and accessibility.

I selected a sample of 142 tweets collected by Meltwater that included the terms “Vero” and “interface” from February 24th to March 2nd, and personally assessed the sentiment of every tweet (The sentiment of tweets is the most straightforward to analyze). Initially, Meltwater assigned a positive sentiment to 74.6% of the tweets. I found that only 50% of the tweets had true positive sentiment toward Vero’s interface, indicating that general opinions toward Vero’s appearance were more controversial than ideal.

Furthermore, highly influential tech publications such as Mashable and Gizmodo have criticized the app as poorly designed. Daven Mathies of Digital Trends even went so far as to call Vero “the ugliest social media app in existence.” The negative reception of Vero’s appearance is likely due to the number of its features and pages, which leads to it having a cluttered landscape. I found navigating through the app to be maze-like at times. It also doesn’t help that Vero features an unorthodox color scheme – black, white and different shades of teal blue. A confusing and unorthodox layout such as Vero’s hurts the usability and desirability of an app.

When Vero became popular, it was dubbed a Facebook competitor because it doesn’t include ads and offers similar sharing capabilities. It was also dubbed an Instagram competitor because it is a media content-based platform and it bites heavily from Instagram’s interface. Furthermore, its primary appeal is that it shows posts in chronological order instead of incorporating algorithms for post viewing like Twitter, Instagram, and Facebook.

These comparisons ultimately hurt Vero because it put the newly emerging app on a pedestal with already established platforms. The graph below depicts Vero’s share of online news coverage compared to Facebook’s and Instagram’s coverage during Vero’s peak hype.

Vero’s coverage seems nonexistent in comparison to the other platforms – you must look closely to see the tiny spikes in Vero’s line. More than Facebook and Instagram simply receiving more coverage, this shows how cemented these platforms have become in our everyday lives. Most of the stories that featured Facebook and Instagram were not about the platforms but included them in some way, shape, or form.

Vero is just not included in these discussions yet and competing with the two platforms puts an unnecessary damper on its success. If Vero had its own niche, a completely new avenue to provide something different from other platforms, it would attract users without other social media giants being brought into the conversation. The same goes for other emerging social media apps.

How the press reacts to an app is out of the hands of its creators, but a new/emerging product generally benefits from a good relationship with the press. Publications and blogs have a ton of influence on whether an app will be accepted by general audiences, and tech publications such as Gizmodo and Mashable didn’t hesitate to give Vero bad reviews. For example, Mashable held no punches on the app, and it has a reach of 10 million on its Twitter account. This does not include Mashable’s reach of 12 million as a news publication. Both numbers are assigned by Meltwater based on the publication’s following.

Beyond just bad reviews, Vero’s overall interaction with the press has been a rocky one. Representatives of the app contacted multiple publications that gave negative reviews and requested updates. For example, after Gizmodo initially gave a negative review of Vero, a representative requested an update concerning information about Hariri’s past with his company in Saudi Arabia. This only led to Gizmodo finding more research on Hariri to prove that he was indeed a part of the company when it wasn’t paying workers, which didn’t help Vero’s cause. Unhealthy relationships with the press such as this one make the people behind a product seem untrustworthy and hurt the product’s image.

Of course, Vero isn’t an all-bad alternative to Facebook and Instagram, but its emergence was botched by its relationship with the press, its competition, its appearance, and its servers. Hopefully, creators of new social media apps can learn something from Vero’s issues, and most importantly, at least appear to be people of decent moral standing.