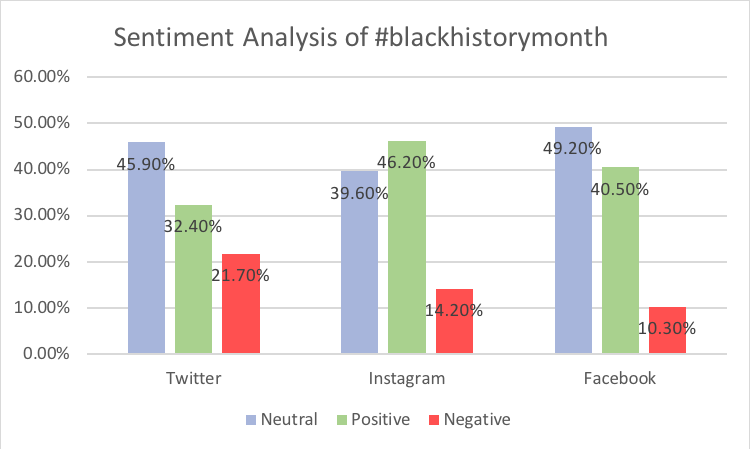 Two-thirds of the way through February, most of the social media hype for Black History Month has died down. Social media is one of the primary ways we celebrate Black History Month, and by celebrate, I mean make a few posts about it and or review Black Panther on Facebook. With that said, it’s important to celebrate the movement in any way you can. Twitter, by far, reigns supreme in facilitating organic discussion for the BHM celebration.

I have analyzed Twitter’s dialogue through a series of searches and “widgets,” on Meltwater. Meltwater is a social media monitor that collects a generous sample of posts from Twitter, Facebook, Instagram, YouTube, forums, comments, and products reviews. For the purposes of this article, I will only compare Twitter to Instagram and Facebook. All of the data collected is from February 1st through February 15th unless otherwise specified.

A similar pattern was found for the hashtag, #blackhistorymonth, generally the most used hashtag for BHM across the three platforms. Twitter’s dominance on the topic is especially notable because Twitter has less than one-third the number of Instagram users and around one-seventh the number of Facebook users. This discrepancy between the number of users and topic dominance points to Twitter’s lead spot in social media’s sociopolitical realm.

The first true indicator of Twitter’s authentic BHM discussion is its sentiment analysis. Sentiment analysis determines whether a topic is discussed positively or negatively by assessing keywords surrounding the search term. The negative sentiment scores of #blackhistorymonth on Instagram and Facebook were 14.2% and 10.3% respectively. Twitter had a higher sentiment score of 21.7%, as shown here:

Twitter’s higher negative sentiment score could suggest that tweeters feel more negatively about Black History Month – or it could simply suggest that more controversial opinions about BHM are expressed on Twitter. Remember that sentiment score only measures keywords – there is no way to assess how the person behind the keyword actually feels. For example, a tweet about the oppression of black people paired with #blackhistorymonth would be categorized as negative sentiment, even if negativity is not expressed toward the hashtag.

Since people are more likely to express these controversial opinions on Twitter, the opinions themselves are more likely to go viral, highlighting esoteric insights about BHM less likely to be seen on Instagram or Facebook. For example, tweeter @HoodSocialist highlighted the Tignon Laws of late 18th century Louisiana, reminding people that there were laws that “banned black women from exposing their natural hair.” The post has been retweeted 23,000 times, which made up a significant portion of the sample of tweets collected by Meltwater.

And this tweet isn’t the only one of its kind. There seems to be a central discussion/post for Twitter’s BHM discussion every day. One viral post highlighted Ruby Bridges, the first black child to attend an all-white elementary school. Another discussion centered around the legend about how an entire swimming pool was drained because Dorothy Dandridge, a famous black entertainer of the mid-20th century, stuck her toe in.

Such prolific and specific discussions were simply not prevalent on Facebook or Instagram. The popular discussions on Instagram and Facebook remained stagnant during the first fifteen days of February and centered around generic themes, which are shown below.

On the other hand, Facebook is built for maintaining the relationships you already have or reaching out to people within your network. Hence, the friend request. On this platform, there are fewer opportunities for a post to break through the network you already have and be visible on a wider scale. Moreover, your friends on Facebook – close or not – may not share your views, or you may not want them to know what your beliefs are. Twitter and Facebook generally share the same capabilities as far as posting and post format, but they elicit very different outcomes as far as discussion.

On the other end of the spectrum, people on Instagram may scroll past an image of an 18th-century black woman wearing a headwrap because it doesn’t necessarily grab their attention. Obviously, the image part of the post on Instagram is valued over the caption, and re-post capabilities are not as fluid as Twitter’s retweet capabilities. Furthermore, Instagram is generally not a valued platform for sharing sociopolitical views since it is not discussion based.

The BHM discussion on Twitter packs more of a punch than discussions on other social media platforms – and that is not solely due to its custom emoji. People on Twitter seem to be talking about black history month in a myriad of ways, albeit it’s only for the first ten days of February. Nonetheless, it makes for a far more comprehensive history lesson.