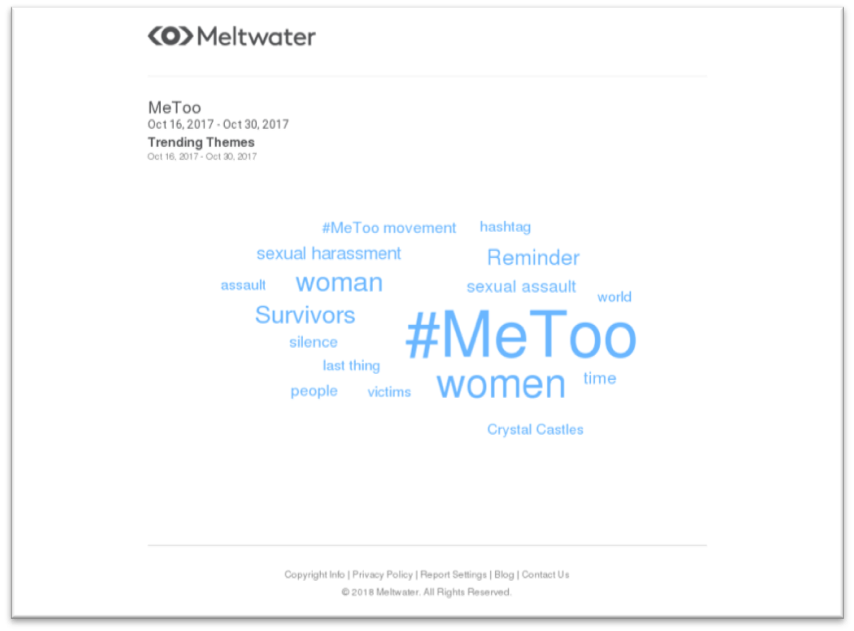 #MeToo is what every hashtag wants to be – it is catchy, widely applicable, and just two syllables among other things. However, during the last three-and-a-half months, it hasn’t been as applicable as it was in its previous 11 years of usage. #MeToo is now the face of a paradigm-shifting social movement tackling widespread sexual misconduct around the world, not just in Hollywood. It has been honored by Time magazine as Person of the Year, a rare feat among hashtags. Nonetheless, #MeToo has recently been the subject of backlash as many criticize the movement for confusing less serious forms of sexual conduct with more serious forms. A look at the hashtag’s usage over the past few months prove that some of the backlash is warranted, but most of it is misguided.

Ten years before the New Yorker’s exposé on Harvey Weinstein set off a widespread sexual reckoning, Tarana Burke created a social movement to provide resources for victims of sexual harassment and assault. She called it Me Too. The women behind this movement have been grappling with both acts of abuse for a long time now. A decade later, in the wake of the Weinstein reports, Allyssa Milano jump-started the #MeToo hashtag on Twitter, setting off a rather important chain of events on the social media platform.

As is the case with many movements that cause sweeping change for the betterment of society, #MeToo’s backlash holds it accountable for everyone who participates. The backlash has grown especially in response to recent allegations against two younger, more easily recognizable men in Hollywood – James Franco and Aziz Ansari. Both actors are known to be #MeToo supporters, and allegations against both men are murkier than that of men previously taken down by the movement. Aziz Ansari’s case of sexual misconduct was especially controversial due to his status as a minority, but he was, inevitably, the subject of shame and embarrassment.

In this light, it is crucial to study how the hashtag has been used during the last several months compare data with these claims. I assessed #MeToo usage through a set of simple searches and widgets on Meltwater, a social media monitor that grants access to analytics of a generous sample of social media posts. In this case, it was only beneficial to analyze Twitter data.

I determined that the two most important concepts to measure regarding #MeToo’s backlash were “lumping together” and “conflation”. Critics of #MeToo seem most concerned with how serious offenses are lumped together with or conflated with each other. Therefore, I determined that the most important key search terms to analyze were sexual harassment and sexual assault, as they are the most prominent offenses targeted by #MeToo, with sexual harassment generally seen as less severe.

To measure instances of the terms being lumped together, I simply kept track of how many times ‘sexual harassment’ and ‘sexual assault’ were included in the same tweet. To measure conflation, I kept track of the number of times sexual assault or harassment was used incorrectly in place of the correct term. For example, if a search that analyzed #MeToo usage during the time of Ryan Lizza’s harassment allegations included the key terms ‘Ryan Lizza’ and ‘sexual assault’ instead of ‘sexual harassment,’ I counted all the hits as instances of conflation.

Starting with “lumped together,” I measured how the terms were used at different points in the movement to get a complete picture of the phenomenon. Meltwater collected 1,041,949 tweets using #MeToo between October 16th and October 30th, the first two weeks of the hashtag’s social campaign. Of that number, 38,567 tweets included the term, ‘sexual harassment,’ while 41,685 tweets included the term, ‘sexual assault’. It is important to note that both categories of sexual misconduct were discussed evenly at the beginning of the movement. Of the 80,252 tweets that included either term, 4,348 tweets included both terms, indicating that harassment was lumped together with assault 5.41% of the time under #MeToo. Although five percent seems small, it is not ideal for such a huge sample of tweets, especially when the movement is held accountable for every one of its moving parts. The backlash has some merit in this case.

In the middle two-week period of #MeToo between December 4th and December 18th, there were a total of 605,373 tweets collected. Exactly 16,594 tweets included sexual harassment and 29,110 included sexual assault, displaying a noticeable shift in #MeToo’s dialogue. Of the 45,704 total tweets that included either term, only 116 tweets included both terms. This computes to .25% of tweets having the terms lumped together. In one of which, tweeter GammerGamer demanded, “Can #Metoo make a clear and definite distinction between what is sexual harassment and what is sexual assault? That would be great.”

A similar trend was found between January 16th and January 30th. Only .24% of the sample 24,202 #MeToo offense tweets included both terms. The backlash may be a response to the shift in dialogue in the last two months, as most tweets collected focused on sexual assault. Regardless, it is odd that #MeToo’s backlash has recently targeted the lumping of these offenses together while the movement has been doing a better job of distinguishing between them – and as the movement is showing signs of slowing down in terms of volume of tweets.

With that said, I consider measuring the conflation of these terms more important than measuring how often they are lumped together. To do so, I analyzed three specific instances of recent misconduct allegations and how they were discussed on Twitter – without the use of the MeToo hashtag. This way, I could analyze a more representative sample of tweets.

The first and most prominent sample was that of the Aziz Ansari discussion. The day his story broke and the day after, 13,837 tweets were collected that included his name and the term, ‘sexual assault’ (which is what he was accused of). Only 108 of the total 13,945 included ‘sexual harassment’, indicating a .77% conflation of the terms.

However, people are more concerned with, and rightfully so, the conflation of harassment and assault regarding those accused of the less severe offenses, not the other way around. For example, the CEO of the Humane Society, Wayne Pacelle, has been accused of sexual harassment by multiple colleagues. The same goes for Charlie Walk, the president of Republic Records. Since these are two fairly new cases, there weren’t many tweets to collect, hence why I opted not to include the term, ‘#MeToo’ in the search.

Starting with the Pacelle discussion, there were only 40 tweets collected that included the terms ‘Wayne Pacelle’ and ‘sexual harassment.’ Significantly, no tweets included his name with ‘sexual assault.’ However, 55 out of the 766 collected tweets that included either term paired with ‘Charlie Park’ included ‘sexual assault,’ indicating a 7.18% conflation rate. Taking a closer look, only seven out of those 55 tweets were original tweets – most of them were from relatively unknown news sources tweeting the same two articles from digitalmusicnews.com, a relatively unknown news source. Furthermore, none of the 33 tweets included a MeToo hashtag given the search parameters.

Still, the digitalmusicnews.com articles raise concern. If a relatively unknown source can have such a ripple effect, imagine how much confusion a well-known source can cause surrounding the #MeToo movement. Twitter pages of news sources like CNN and Time generally do a better job of fact-checking and using the proper wording, but that is because they possess an immense amount of influence. Though it may be wrongheaded to hold #MeToo, as a whole, accountable for the discussion generated, we ought to pay close attention to what its most influential reporters are spreading on social media, especially on Twitter. Although highly unlikely, major news sources skewing #MeToo’s message would undoubtedly lead to the counter-reckoning many of the movement’s detractors are warning about, if not hoping for.

On the contrary, it is likely that we are only seeing a small part of #MeToo’s potential, despite data showing the volume of tweets using the hashtag going down. Twitter analytics reveal a wealth of tweeters using the hashtag for healthy, focused, and nuanced discussion, most of which doesn’t confuse Aziz Ansari with Harvey Weinstein. Not to mention, the movement has largely affected only one industry, Hollywood. There are many industries that have yet to be shaken – and sweeping changes yet to be made. For that, #MeToo’s counterpart, #TimesUp, is just as catchy, widely applicable, and only two syllables, among other things.