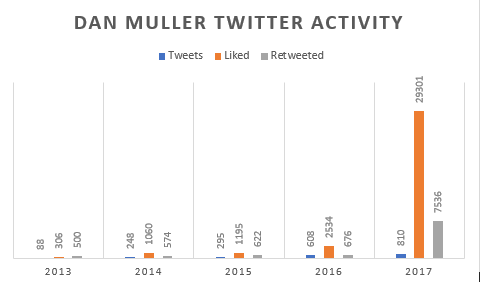 Dan Muller, known to the Redbird family as the charismatic head coach of the ISU men’s basketball team, is becoming an online personality. Part-time coach, part-time NCAA provocateur, Muller is an excellent tweeter. He is savvy with the youth’s lingo, an avid user of emojis, and possesses a candid quality that is consistent with social media’s most prominent figures. In the rigid politics of college basketball, Muller is not afraid to be in the spotlight and stir the pot on Twitter, and in turn, shine a bright light on his basketball family.

Muller’s Twitter page is now in the elite ranks of the college basketball world, complete with a generous follower-to-following ratio and a verified badge. However, it wasn’t always so popular; there was a time when not many people bothered to mention @DanMuller.

To analyze Muller’s page, I ran a Python scraper that collected most of his tweets dating back to 2012. Muller only tweeted 88 times in 2013. In the same year, he was the 103rd most followed college basketball coach on Twitter. Not exactly #RedbirdProud material.  In 2014, he tweeted 248 times, 198 of them retweets, and he would continue to tweet more often in the following years.

Still, Muller was failing to gain significant attention on his favorite social media platform. Nuvi, a social media analytics software, collected just 107 mentions of “@DanMuller” from the first quarter of 2016. A very small amount of mentions were Facebook posts, but most of them were from Twitter due to the @ symbol being included in the search. It should be noted that Nuvi is a social media software that only collects a sample of posts, so not every post that mentioned Muller came up in the search. However, 107 is a low sample considering that the first quarter of the year is usually when Muller is most active and most often mentioned on the social media site – it is the crutch of his team’s basketball season.

For the 2016-2017 season, Muller went back to the drawing board – for his Twitter page. He began a new strategy with posting more often and pairing each gameday tweet with a Bitmoji. Bitmojis may not seem very effective, but they are a significant part of Muller’s approach. He uses the app’s caricatures and animations in a way that suits his charisma, and the animations have only gotten more elaborate over time.

As a result of his new efforts, Muller’s Twitter page showed a huge increase in likes and retweets in 2017, as shown below. Furthermore, Nuvi collected 2,183 posts that mentioned “@DanMuller” during the first quarter of 2017 – more than 20x the mentions in the same period the year before. Undoubtedly, this spike was partly due to a stellar basketball season in which the Redbirds went 28-7. A successful basketball and Twitter season was capped off with Muller’s most famous tweet, in which he pleaded schools of major conferences to match the Redbirds.

This highlights Muller’s increasingly apparent occupation on Twitter: putting his basketball team and conference on the world stage. There were a number of highly influential news and sports publications that posted stories about Muller’s viral tweet, including ESPN, USA Today and Bleacher Report. This year, around the same time in March, Muller unleashed another viral tweet in which he defended the Missouri Valley Conference and took a shot at Wichita State for switching conferences. Again, this tweet was reported by ABC News, CBS News, and USA Today.

Probably the most telling indicator of Muller’s Twitter success is the fact that he has the most well-received ISU-affiliated Twitter page. A @DanMuller tweet has an average of 26 retweets and 87 likes. Illinois State’s official account averages 8.5 retweets and 26 likes per tweet while the official ISU Redbird account averages 9 and 36 – both accounts have significantly more followers than Muller. Furthermore, Muller’s account is the only major ISU affiliated account with more than two tweets that have amassed more than 1,000 likes or more. Muller’s account has 6 (Twitonomy).

So, what is the worth of Muller’s Twitter charade? For one, the Ole Miss (SEC) basketball matchup with the Redbirds in December was a direct result of Muller’s viral plea from a year ago. For Coach Muller, Twitter is more than click-bait. It is work, people, and there is no telling what he is cooking up this offseason.

1 thought on ““It’s Me Again:” Analyzing the Work of Dan Muller’s Twitter”